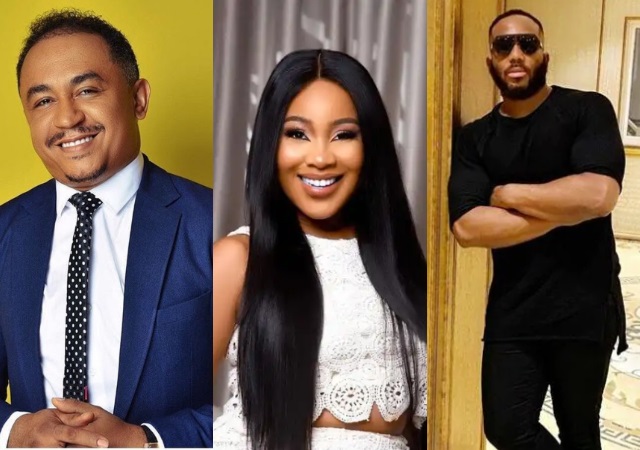 Remember when one of the most talked-about couples in 2020 was Kiddwaya and Erica?

While living at the BBN house, the two were dating. Even after leaving the house, they continued to date, but their relationship couldn’t withstand the test of time, so they called it quits.

Daddy Freeze took a swipe at the disqualified housemate as he announced Kiddwaya’s engagement news.

Daddy Freeze revealed that Kiddwaya had found love again and had proposed to his white woman.

Kiddwaya, his fiancee, Daddy Freeze and his wife, Tastebudz and celebrity pastor, Pastor Tobi Adegboyega were spotted having dinner at a top-notch eatery in London.

Daddy Freeze shared a video of Kiddwaya feeding his wife as he passionately kisses her.

However many had stormed the comment section of Daddy Freeze’s Instagram live to question Erica’s fate, now that Kiddwaya was engaged.

Daddy Freeze told them to slide into Erica’s dm and check up on her if they were really worried.

Sadly His response didn’t sit well with fans of Erica as they lashed out at him.

dazzlingbycandy: Nobody asked you about Erica…but it’s okay. She’s the air that you breathe. We get it

thevc_store: This was so low of daddy Freeze….why call Erica’s name? Was that necessary??

gloria_glowia: Freeze is too petty for his age

girl_allmightyyy: Send Erica a dm why??? You would have ignored the comments Yeye man… everything and everyone in this video is shit. Wait is that not that fake pastor in the video so cringe

lilianifeomaobayemi: Why involve Erica in dis matter.. I thought de ship capsized since Not fair o

idigo_peri: @daddyfreeze who asked you about Erica or you want to be foolish as usual? Old animal focus on attacking pastor