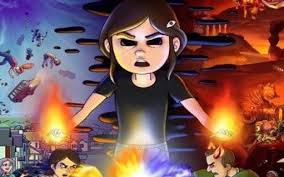 A new animated series called “Little Demon” about a lady who conceives the Antichrist by mating with Satan is drawing criticism and creating a stir in the culture.

But amid the cacophony of frustrated retorts to the show — which airs on the Disney-owned network FXX and stars Danny DeVito as Satan — faith leaders and media experts are sounding some consequential theological and practical alarms for parents and children alike.

“I … can’t believe that this show exists,” Mike Signorelli, senior pastor of V1 Church in New York City, told CBN’s Faithwire. “I think if we could go back 30 years … everybody would universally be shocked and appalled.”

Signorelli isn’t exaggerating the situation, as the promotional language for “Little Demon” alone showcases the disturbing themes and images embedded in the show — violence, paganism, and satanic storylines cloaked in attempted comedy.

“Thirteen years after being impregnated by Satan, a reluctant mother, Laura, and her Antichrist daughter, Chrissy, attempt to live an ordinary life in Delaware but are constantly thwarted by monstrous forces, including Satan, who yearns for custody of his daughter’s soul,” reads the show’s description.

Signorelli said “Little Demon” is the fulfillment of what happens when morals and ethics slowly erode and decay, sending culture on a slippery slope that tragically yields such a strange moment.

“What happens is, things incrementally change year over year to where you can accept what you would have never accepted in a previous generation,” he said.

“As a Christian, I believe that the enemy is after our children. We wrestle not against flesh and blood but principalities powers and rulers in high places.”

Considering the purported paganistic themes in “Little Demon,” one of the quotes about the series that is circulating comes from actress Aubrey Plaza, who plays Laura.

“I love that we are normalizing paganism,” Plaza said while speaking about the show during an event this summer. “Laura is a pagan. She’s a witch. She’s jacked.”