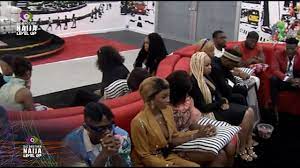 Idoamebo reports that during the seventh week of the programme, OGHENOVO EGODO-MICHAEL recalls noteworthy events that happened in the BBNaija home.

Bryan got in a conversation with Daniella regarding her confused relationship with Dotun. He told her that no matter what choice she makes, he has her back.

Another fake housemate, Deji, was evicted from the Level Up house. Recall that last week, Modella, was the first fake housemate to leave the house. While on stage with Ebuka immediately after his eviction, Deji noted that he will miss Dotun and Chichi the most. According to him, even outside the house, he is willing to know her better and take things further between them.

Giddyfia and Diana were also evicted.

Lovebirds, Bella and Sheggz, continued having consistent fights. This is despite the fact that Sheggz had earlier spoken about his intention to marry Bella.

Meanwhile, Hermes became the Head of House for the second time, following a fishing task they had. Also, Biggie pardoned Allyson after successfully completing her tail of house clown task from last week. On the other hand, Big Brother extended Sheggz’s punishment by putting him at the service of the housemates for the week.

Housemates took a trip down memory lane as Biggie played a video collage of all the housemates that had been evicted from the house so far.

The housemates had a Minimie task that featured a few games. In the end, Chomzy emerged the winner.

An acute food shortage continued to be an issue in the house. Phyna and Groovy had a fight because Groovy wanted to cook for himself alone. However, she was more upset that Groovy was used to taking his things out of their shared locker, and expecting her to apologise first anytime they had an issue.

Later in the day, Chomzy ‘dragged’ the level two housemates for unnecessarily hoarding meat, saying she hoped they could keep that energy forever.

Day 48: Sheggz stands up for Bella

There was a serious fight in the house between Bella and Rachel, which led to the former behaving in an uncontrollable manner. The fight started when Bella told Rachel, who was in charge of food, that she wanted beef instead of chicken. Suddenly, Sheggz stepped in, saying that what Rachel did was ‘dumb’ and ‘stupid’. Rachel expectedly got upset and she insulted Sheggz as well. This infuriated Bella, and she almost poured the food on Rachel.

Housemates later had a Unik Soap task, which was won by Adekunle, Chomzy, Eloswag and Hermes. Biggie later surprised the housemates with a pool party, for them to unwind and ease tension.

Big Brother commended the housemates for a job well done on their wager task. Recall that the housemates had lost their wager task last week which, led to food shortage and fights in the house. This week’s wager task was dedicated to the men and women who dedicate their lives to the service and betterment of humanity. Housemates were adorned in beautiful attire from different tribes in Nigeria, as they moved their bodies to the rhythm of melodious traditional music. Big brother commended the HOH, Hermes, for his coordination, and for making sure that everyone showed up.

Biggie also commended Phyna for doing a great work in putting housemates together in a composed manner and making them execute their performance creditably. On the other hand, Big Brother called out Sheggz and Bella for their nonchalant attitudes during the rehearsal for the task. They were asked to apologise to housemates.

The Dano task started with some games. Later on, Big Brother made housemates speak on their private lives and challenges. Sharing their individual childhood experiences and traumas, the housemates were thrown into a frenzy of emotions, and a couple of housemates even shed tears. However, they quickly cheered themselves up with the song composed for the task.

During the Saturday night party, the housemates discarded their worries and had fun.