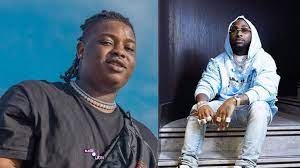 Nigerian singer, Barry Jhay has disclosed the reason he turned down a record deal, Davido offered him years ago. Idoamebo reports

The singer explained that he rejected the record deal from the DMW boss because he was not ready to be in competition with other artistes in the label.

Barry Jhay stated this during a chat on Echo Room.

He noted that the last musician Davido signed at the time was Peruzzi.

According to the artiste, he and Davido had worked on a song ‘Only You’ and OBO was impressed so he got his lawyer, Prince to draw up a contract, but the deal did not go through.

Barry Jhay stated that there was too much competition amongst Mayorkun, Peruzzi and others in DMW which he was not comfortable with.

He further explained that when the ‘FEM’ crooner tried to sign him, he felt that was not what he needed even though OBO and everyone in the music label supported his career.