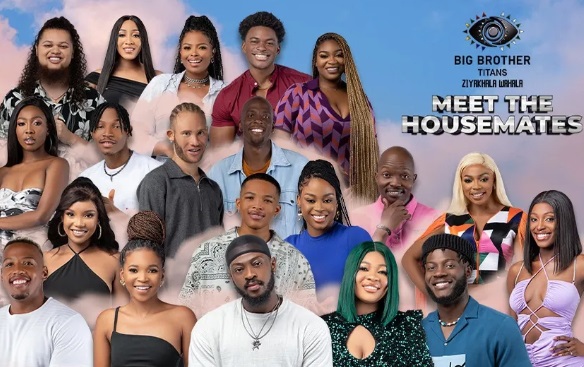 The Big Brother Titans reality TV show kicked off on Sunday evening with the expected razzmatazz and glitz as 20 housemates were unveiled.

Idoamebo reports that the reality show, which will hold for 72 days, is co-hosted by famous On Air Personality (OAP) and Big Brother Naija anchor, Ebuka Obi-Uchendu, and Big Brother Mzansi’s host, Lawrence Maleka.

Big Brother Titans is a fusion of the South African and Nigerian versions of the Big Brother franchise featuring contestants from both countries.

Big Brother Titans
Meet the housemates in the BBTitans:

* The show began with the first housemate Khosi, who was unveiled on Sunday night. Elated and gorgeously dressed Khosi is a journalist from South Africa ans aged 25.

* Yemi Cregx from Nigeria is a fashion influencer and he is 30 year-old.

* Olivia is an actress and content creator from Nigeria, she is 23 year-old.

* Nelisa, the fifth housemate is a South African, born in Durban and raised in Cape Town. The 25-year-old said she her great energy and trouble follow her everywhere. She fancies men that are tall dark and handsome.

* Blaqboi is a film maker and content creator from Jos, Plateau State, Nigeria. He is 26-year-old.

* Nana is an entrepreneur who dropped out of school. She is from Kaduna State, Nigeria, aged 22.

* Ipeleng is a Law student and aspiring content creator. She is 25-year-old.

* Marvin exuded much energy and showed some of his qualities including his athletic body and six-pack, and ability to
move it to rhythms. He is 29-year-old chemical engineer and model from Nigeria.

* Thabang is a Data analyst from Soweto, South Africa. He said he is always ready to groove.

* JayPee is a Nurse from Lagos State, Nigeria. She said she is ready to show off her drip in the House.

* Yaya is a model, actress and TV presenter from South Africa, aged 31.

* Ebubu is an actor and a model. He is 28-year-old from Anambra State, Nigeria and feels ecstatic and elated as a housemate. He intends to fall in love in the House.

* Khehla is a sales executive from South Africa and aged 31.

* Jenni O is a Health and Safety specialist from Nigeria. She is 25.

* Tsatsii is an art lover and a scientist from South Africa. She is 24.

* Justin is a content creator from South Africa. He is 21-year-old.

* Yvonne is a model, skincare enthusiast and interior designer from Akwa Ibom State, Nigeria. She is 27-year-old.

All the 20 housemates will be vying for a cash prize of $100,000 and other mouth-watering prizes over the 10 weeks.

According to the organisers of the reality TV show, viewers across the continent can keep their favourite housemates through the voting options available on Africa Magic website, MyDStv and MyGOtv apps.