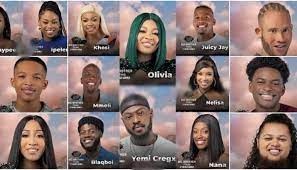 19 BBTitans housemates nominated for eviction in week one

This will be the first eviction, and according to Biggie, is scheduled for Sunday, January 22, 2023.

Leading the nomination list is Nigeria’s Nana from Kaduna with eight nominations. She’s followed by South African Justin with five nominations, Khosi, Olivia, and Yemi Craigx with four nominations each, Tsatsii, JayPee, Lukay, and Jenni O with two nominations each. BlaqBoi, Yaya, Kanaga Jr, Marvin, and Nelisa all got one nomination each.

However, six housemates weren’t nominated for possible eviction and they include Ipeleng, Yvonne, Ebubu, Juicy Jay, Thabang and Mmeli.

In the same vein, Biggie announced that the names of nominated housemates won’t be revealed until Sunday, January 22, 2023 at the first live eviction show.

Similarly, the first Head of House Mmeli was is yet to use his Veto power to save and replace.

This is how the 20 housemates nominated themselves.